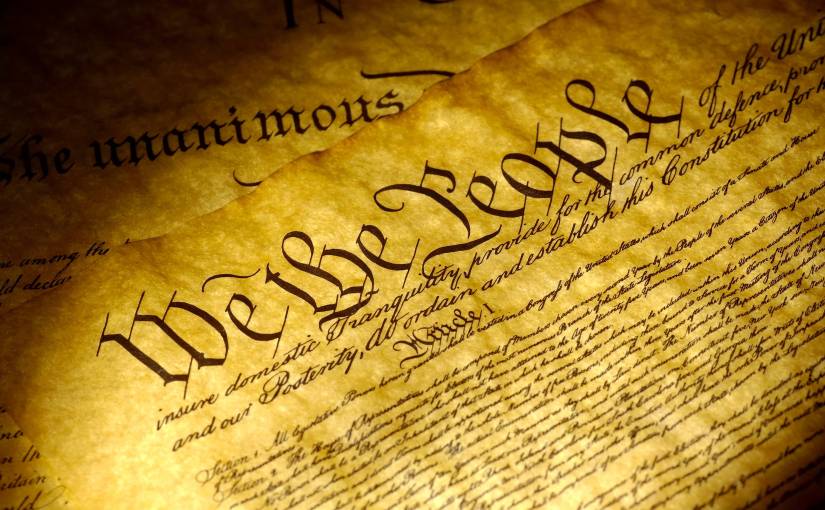 Back in 2007, when Bush II was the worst things could get (Oh how wrong we were!), I amused myself by writing a blog post imagining a conversation about the Declaration and Constitution between Clemsy and Kurt Vonnegut. As it’s both relevant and snarky, I’ll give it another whirl…

Clemsy sits at his dining room table drinking far too much coffee, tapping his fingers, scrunching his eyebrows and seriously trying to wrap his head around a thought or two while not noticing big, black Toby giving definite signals of his need to visit his favorite tree.

“Dang,” he mumbled. “That many people can’t be that wrong, can they?”

He looks back down at the coffee stained document.

We hold these truths to be self-evident, that all men are created equal, that they are endowed by their Creator with certain unalienable rights, that among these are life, liberty and the pursuit of happiness.

“May have a point there, boy,” said Kurt looking over Clemsy’s shoulder. He sat down to Clemsy’s left. “I think your dog is trying to tell you something.”

“Well, what does ‘self-evident’ mean?”

“It means… er…. hmmm. Lessee…” Clemsy opens his laptop for a quick Google. Entering the term he reads:

clear enough to need no proof

“Haven’t a clue.” Clemsy refers back to his computer.

Not to be separated, given away, or taken away

“Okay, let me get this straight. As Americans this is what we should think, right? We have no-brainer rights that no one can take away.”

“Now you’re catching on. Sounds great doesn’t it? Too bad it’s a load of shit.”

“Sure, it’s correct when you think about it, but what the hell’s the point when people don’t have the vocabulary of a chipmunk and all those spelling and vocabulary lists you supposedly memorized in school aren’t worth a damn. You get a vocabulary by reading and writing at home. Who thinks about what they read and write in school? How about this little word: among, as in ‘among these are life, liberty and the pursuit of happiness.’ What does that mean?”

“Well,” Clemsy draws his eyebrows together looking for a trap. “Seems simple enough. The list of rights is longer than just those three things.”

“Good boy. And the rest of them are no-brainers also, right?”

“Listen. Thomas Jefferson was making some god awful assumptions here, the dolt. ‘Self evident?’ What was he thinking? The only things self evident to a chipmunk are food, sex and the fox trying to eat him. People are chipmunks. They need things spelled out for them as in ‘please tell me how to think and what to believe so I can concentrate on food, sex and foxes.’ The Founders really did know this. If not, what’s the point of the Bill of Rights?”

“To make sure we know what our rights are?”

“Right. Kind of like saying, ‘Look moron. You should already know this but if history is any guide you’re going to let the republic ride the great swirl in a hurry unless we give you directions. Here are the most important rights we could think of. Read them carefully. Eventually you’re going to elect people who will try to take them away from you. Don’t let them. They’re also going to try to tell you that these are the only rights you have. Not true. You’re going to have some holy rollers who resent no longer being able to hang witches tell you that the Constitution is like the Bible, read it literally or burn in hell. These are your rights. No additions, deletions or, most importantly, interpretations. So if the Bill of Rights says nothing about birth control, then you have no right to it. And if you’re not a citizen, than you have no rights at all because the Constitution only applies to U.S. citizens. In fact, if you behave in a manner we define as against the greater good, than you forfeit all those rights.”

“Whoa! Hold on! That doesn’t say that anywhere!”

“Right. So what? If ‘We the People’ listen to them, then it becomes true.”

“Now you’re being clever. Exactly! One nation under God, lad! And now a nation based on a Revolution that says things about ‘all men,’ ‘self evident’ and ‘unalienable’ acts like an Old Testament, xenophobic religion. So torture is fine if you’re from another tribe or get kicked out of this one. Grab brown babies from brown mothers at the southern border? No problem. Now that’s self-evident.”

“But, but… but,” Clemsy stuttered.

“Eloquent. Further, you know that Christians have done the same thing to Christ that’s been done to Jefferson. For some reason, the most vocal Christians among us never mention the Beatitudes. But, often with tears in their eyes, they demand that the Ten Commandments be posted in public buildings. And of course that’s Moses, not Jesus. I haven’t heard one of them demand that the Sermon on the Mount, the Beatitudes, be posted anywhere.

“Wait a bit!” Clemsy shouted. “I know we can do something to turn things around! Got to!”

“Well, here’s the big problem as I see it. There is a tragic flaw in our precious Constitution, and I don’t know what can be done to fix it. This is it: Only nutcases want to be president.

But, when you stop to think about it, only a nut case would want to be a human being, if he or she had a choice. Such treacherous, untrustworthy, lying and greedy animals we are!

I was born a human being in 1922 A.D. What does “A.D.” signify? That commemorates an inmate of this lunatic asylum we call Earth who was nailed to a wooden cross by a bunch of other inmates. With him still conscious, they hammered spikes through his wrists and insteps, and into the wood. Then they set the cross upright, so he dangled up there where even the shortest person in the crowd could see him writhing this way and that.

Can you imagine people doing such a thing to a person?

No problem. That’s entertainment, and entertainment is the opiate of the masses, and as long as everyone’s more concerned about who’s winning on Survivor or The Voice or the sex kitten de jour’s weight, then they won’t be reading and writing and improving their vocabulary so they can know what easy words like self-evident or unalienable mean.

I know I’m mixing metaphors, but the chickens have elected Colonel Sanders, you know.”

“But is there anything I can do, Kurt?”

“Sure. Write this conversation down and publish it in your blog. At least you’ll be able to say you did something. And btw, as they say today, good thing I’m dead. Your dog just peed on my leg.”

(Author’s note: There are some actual Vonnegut quotes up there.)